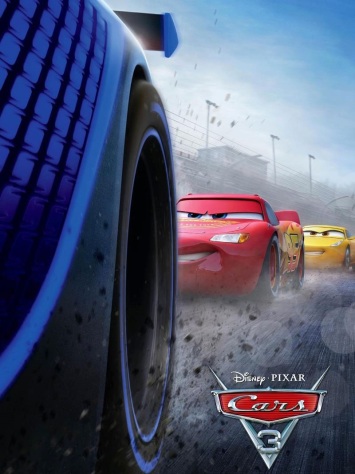 Having been the black sheep of Pixar’s catalogue for many years, it seemed only logical to lay the Cars franchise to rest. Alas, that was never the case – there were box-office revenues and merchandising opportunities to consider – so instead the world must make do with another instalment in the series which, fortunately, isn’t as bad as anticipated.

Some years after his inaugural season, Lightning McQueen (Owen Wilson) remains the most popular competitor in the Piston Cup championship, and has developed a friendly rivalry with a number of his fellow racers. Another consecutive Piston Cup looks to be a certainty for McQueen, but that changes upon the arrival of Jackson Storm (Armie Hammer). With his aerodynamic body and modern technology, Storm is purpose-built to go as fast as possible, presenting himself as a threat to McQueen’s chances of victory.

As the season progresses, many of Lightning’s friends have been fired by their teams and replaced by much faster counterparts, all having an edge over the older cars in the field. Desperate not to succumb to the same fate, McQueen pushes himself well beyond his limit, leading to a spectacular crash that brings his season to a premature finish. As if that weren’t humiliating enough, the championship ends up being awarded to a very cocky Storm.

While Lightning recovers from his brutal accident, the Rust-Eze Racing Team – to which McQueen has remained loyal for quite some time – is sold to an ambitious millionaire named Sterling (Nathan Fillion) who invites Lightning to prepare for the season ahead at his brand new training facility. Assigned to help Lightning is Cruz Ramirez (Cristela Alonzo), a personal trainer with some very unorthodox training techniques.

Cars 3 is much closer in spirit to the original Cars film than the dismal Cars 2 was, choosing to focus exclusively on Lightning and his racing endeavours rather than Mater’s amateur acts of espionage. This may be a retrograde step, but it is one which is most welcome, for the more relaxed atmosphere makes the film easier to consume. Complementing this change in tone is the return of composer Randy Newman, whose mellow tunes are also reminiscent of the first movie.

Where Cars 3 differs from the previous two movies is in the themes it explores, such as the pitfalls of ageing and retirement. Looking slow and out-of-date when compared to his rivals, Lightning must evaluate his future and whether he can continue competing in the Piston Cup. Discussions like these are often reserved for films with an older demographic, so it’s a surprise to see such heavy material placed in a family-friendly animation, and the team at Pixar should be commended for doing so.

Sadly, that’s about as revolutionary as the movie gets. Although Cars 3 has its merits – one can still enjoy watching the characters drive through the scenery – they are virtues that could be applied to any Disney or Pixar film. In other words, factors such as the splendid animation, likeable-yet-stereotypical characters, great voice-acting and exemplary sound mixing are now the norm in Hollywood features rather than rarities.

Cars 3 is everything that its predecessor wasn’t: focused, easy-going and, thanks to a more mature storyline, surprisingly thoughtful. It may not meet the levels of excellence that are often associated with this studio, but those keen on seeing it will nevertheless enjoy it.